Execution of Pugachev: Version of the President of the Union of Criminalists and Criminologists 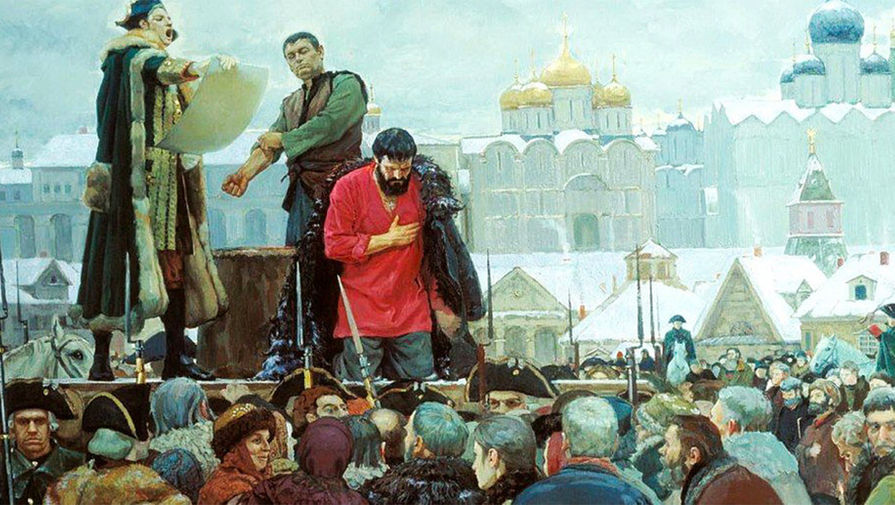 The Execution of Pugachev: ‘Forgive me, Orthodox people’ (Painting by Viktor Matorin)

On (10) 21 January 1775, Yemelyan Pugachev was executed in Bolotnaya Square in Moscow.

Yemelyan Pugachev was a Don Cossack. He proclaimed himself Emperor Peter III, organized a rebellion of the Yaitsk (Ural) Cossacks, which very quickly turned into a huge peasant uprising. In the autumn of 1774, Pugachev was defeated in the battle at Solenikova Vataga and fled with the remnants of the army. However, he did not know about the conspiracy of Cossack colonels who decided to get a pardon from the government in exchange for the conspirator.

In September 1774, Yemelyan Pugachev was surrendered to the authorities and sent to Simbirsk. As a result of interrogation and torture, he gave up himself and his associates. The interrogation was conducted by the commander of the punitive troops, Count Peter Panin, and the head of the secret commissions, Major General Pavel Potemkin. In early November, Pugachev was transferred to Moscow. Together with him, all the remaining captive participants of the uprising were brought to the general investigation. The investigation was conducted by a special commission of inquiry of the Senate Secret Expedition, the main members of which were the Moscow governor Prince Mikhail Volkonsky, the chief secretary of the Secret Expedition Stepan Sheshkovsky and Major General Pavel Potemkin.

Empress Catherine II was keenly interested in the progress of the investigation.

After several sessions, the court sentenced Pugachev to death: ‘Emelka Pugachev to be quartered, his head to be fixed on a stake, the body parts to be carried to the four parts of the city and put on wheels, then burned in those places.’

The execution of Pugachev and other convicts took place on 21 (10) January 1775 in Moscow in Bolotnaya Square. A lot of people were present at the execution of the rebel; it was very cold. Before his death, Pugachev repented before God and the people. Then the head cut off by the executioner was shown to the people and placed on a stick, the rest of the body – on the wheel.

By the way, the executioner had a secret instruction from Catherine II to reduce the torment of the convicts. Therefore, Pugachev and his ally Perfiliev were first beheaded, and only then quartered.

That is how the rebellion ended, which had been started by a handful of unruly Cossacks but which had agitated the country from Siberia to Moscow and from the Kuban to the Murom forests. Panin and Suvorov were putting down local mutinies in the restless provinces for almost a year.

At the end of the Pugachev rebellion, Catherine II published a manifesto in which this uprising was buried into ‘eternal oblivion and deep silence.’ Moreover, wanting to destroy the memory of that event, she even ordered to rename the Yaitsky town in Uralsk and the Yaik River in the Urals.

P.S. There is a legend that on the eve of the execution, Catherine II secretly arrived at the Butyrsky prison castle, where she met with Pugachev. She apparently wanted to see for herself that Pugachev was not her dead husband, Peter III. One of the Butyrsky pre-trial detention centre towers is still called ‘Pugachevskaya.’