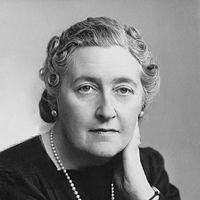 Dame Agatha Mary Clarissa Christie, Lady Mallowan, DBE was born on 15 September 1890 into a wealthy upper-middle-class family in Torquay (a seaside town in Devon, England). She was home schooled. She worked as a nurse during the First World War. In 1917, Agatha qualified as an apothecaries’ assistant.

Her first husband was Archibald Christie; they married in 1914 and had one child before divorcing in 1928. During this period, she began to engage in literary work. Already in her first novel, The Mysterious Affair at Styles, published in 1920, Christie introduced to the readers an amateur detective Hercule Poirot and his colleague, a good-natured, perceptive Miss Marple, who solves mysterious cases by noticing little things and accurately judging people.

During both World Wars, she served in hospital dispensaries, acquiring a thorough knowledge of the poisons which featured in many of her novels, short stories and plays. Following her marriage to archaeologist Max Mallowan in 1930, she spent several months each year on digs in the Middle East and used her first-hand knowledge of his profession in her fiction.

Christie was a successful play writer as well. Her 16 plays were staged in London and some of were filmed. In honour of her many literary works, Christie was appointed Commander of the Order of the British Empire (CBE) in the 1956 New Year Honours.

Christie died peacefully on 12 January 1976 at age 85 from natural causes at home at Winterbrook House. Christie has been deservedly called the Queen of Crime.

Source of the image