The author’s project «Criminal law gatherings at N.A. Lopashenko’s» together with the Saratov Branch Office of the Union of Criminalists and Criminologists 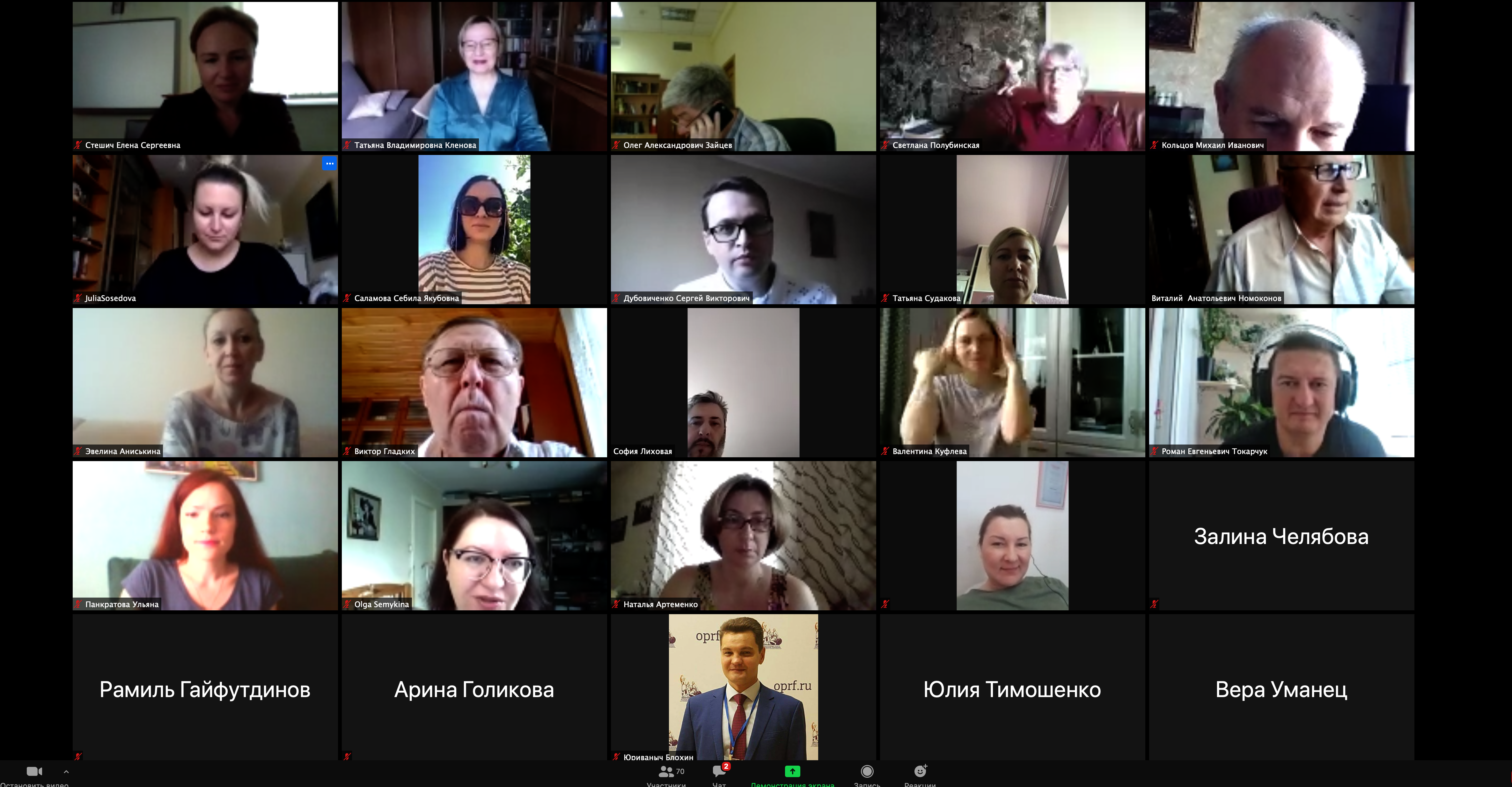 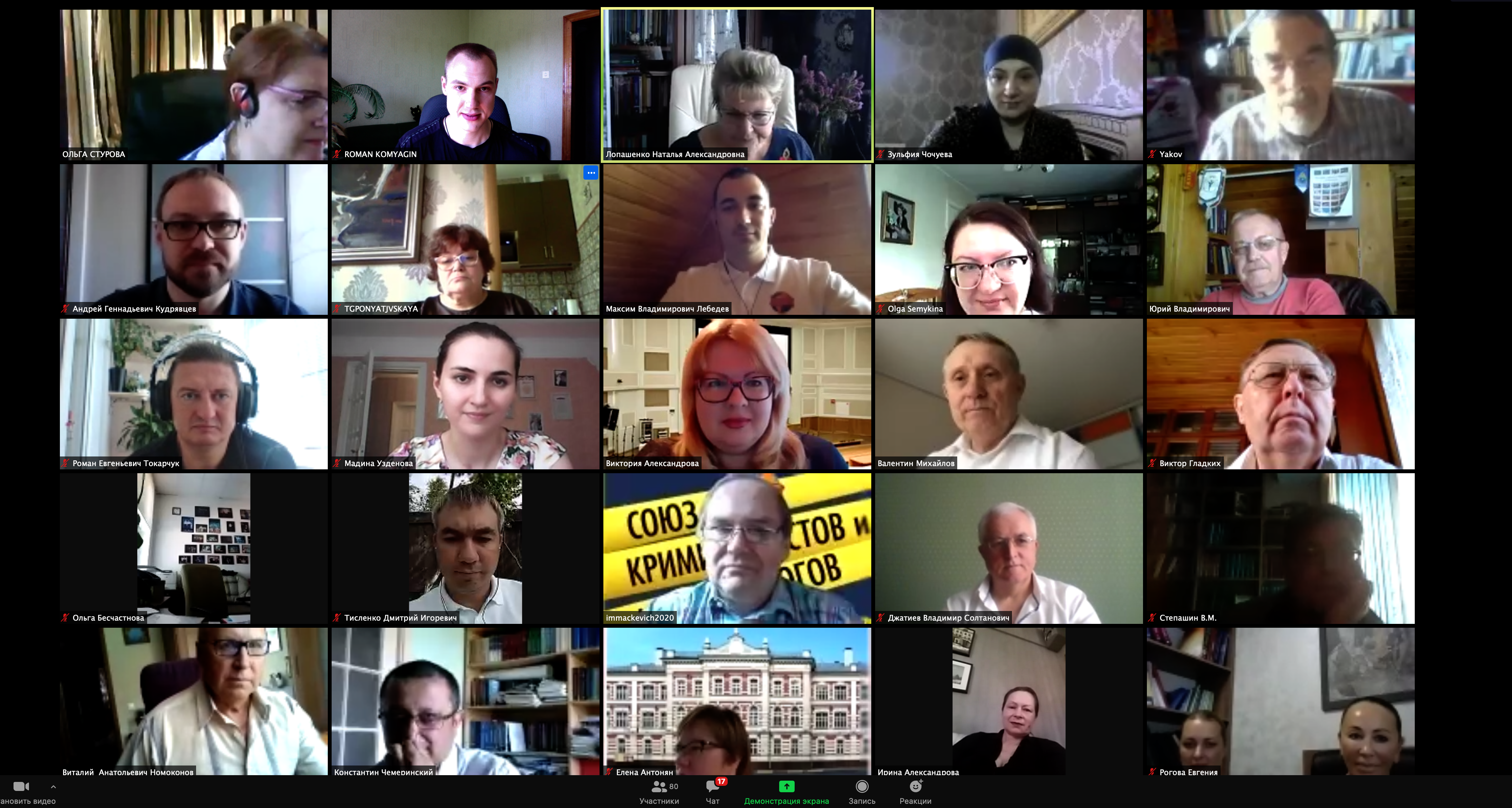 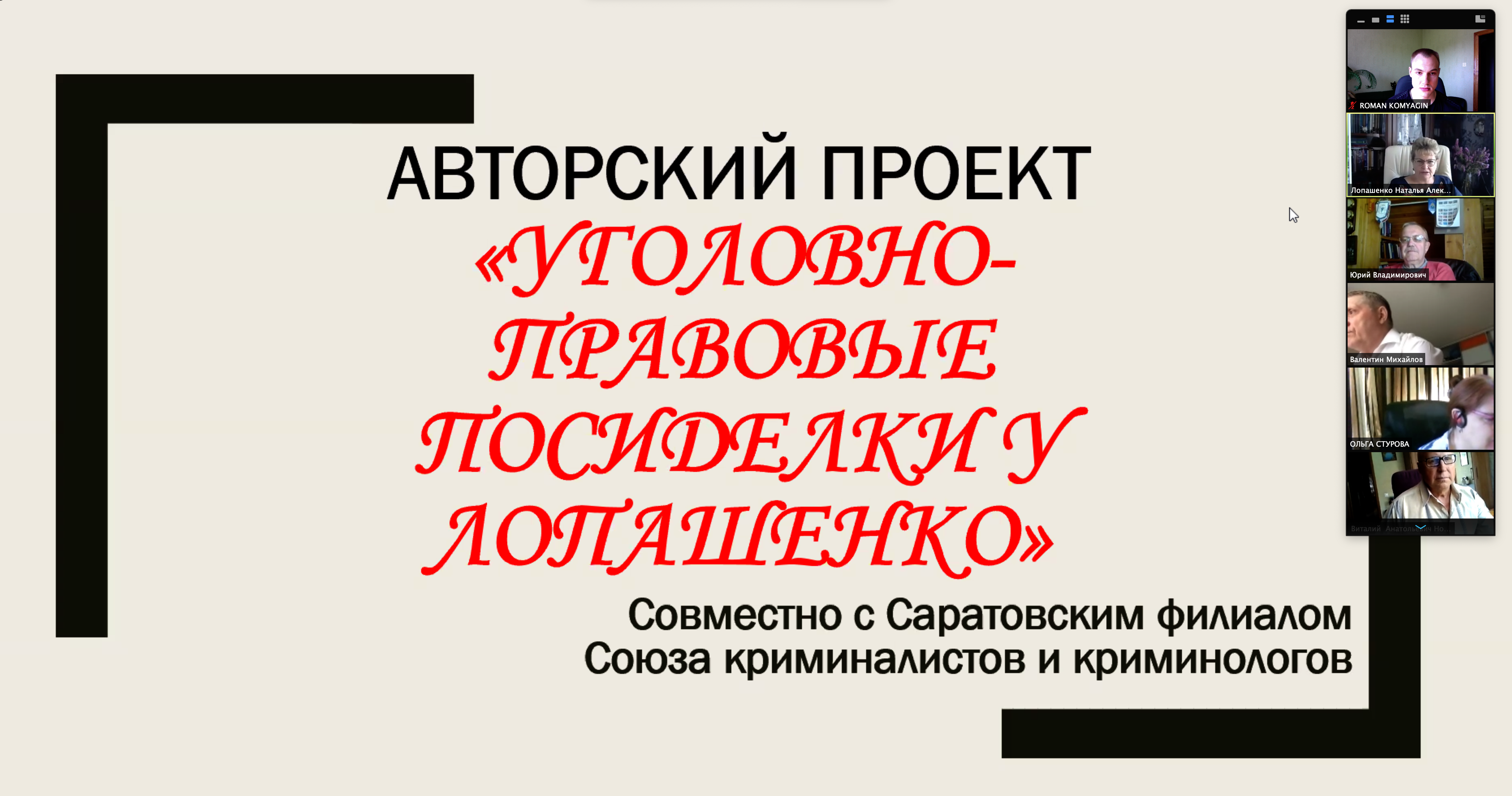 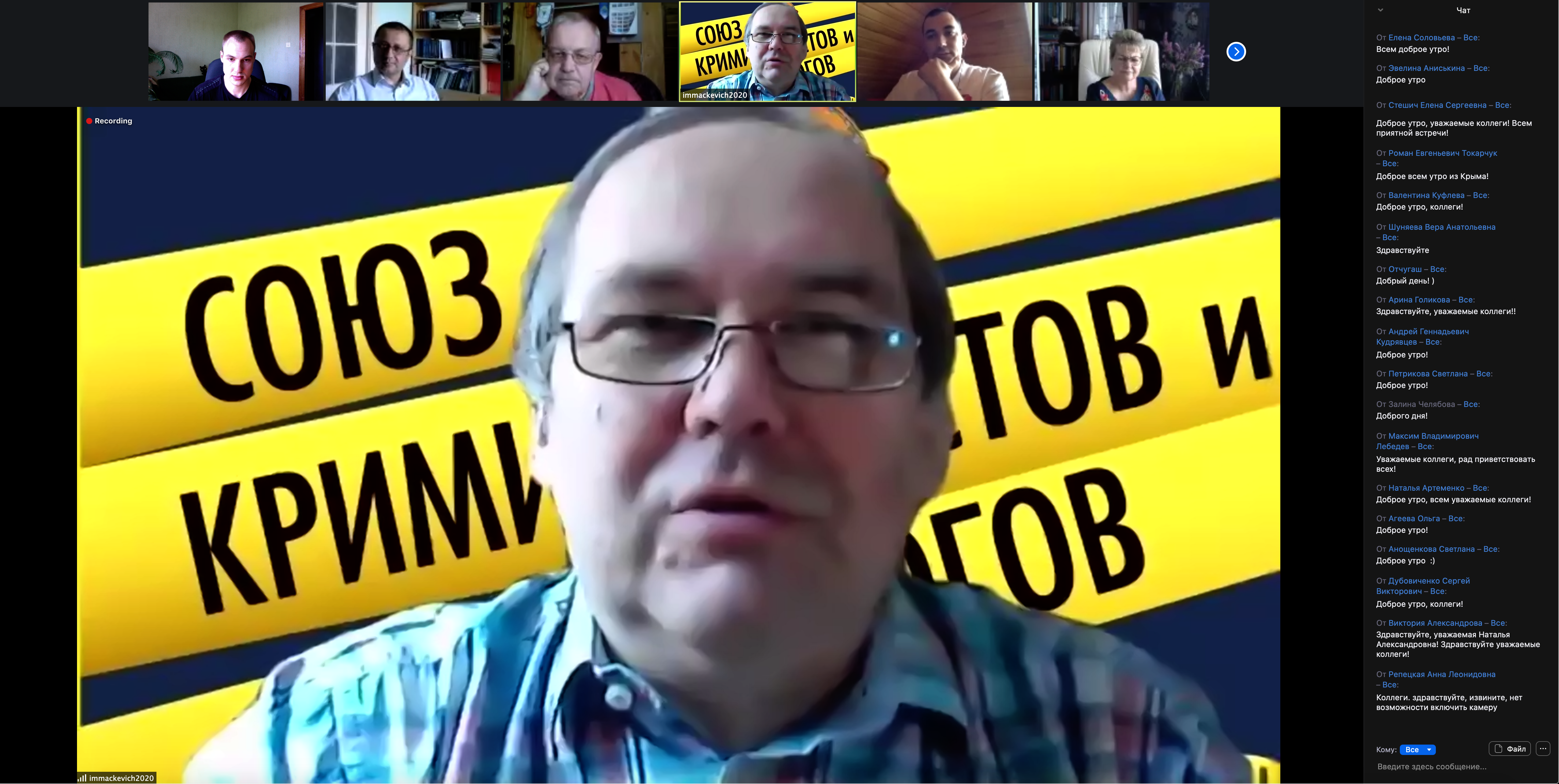 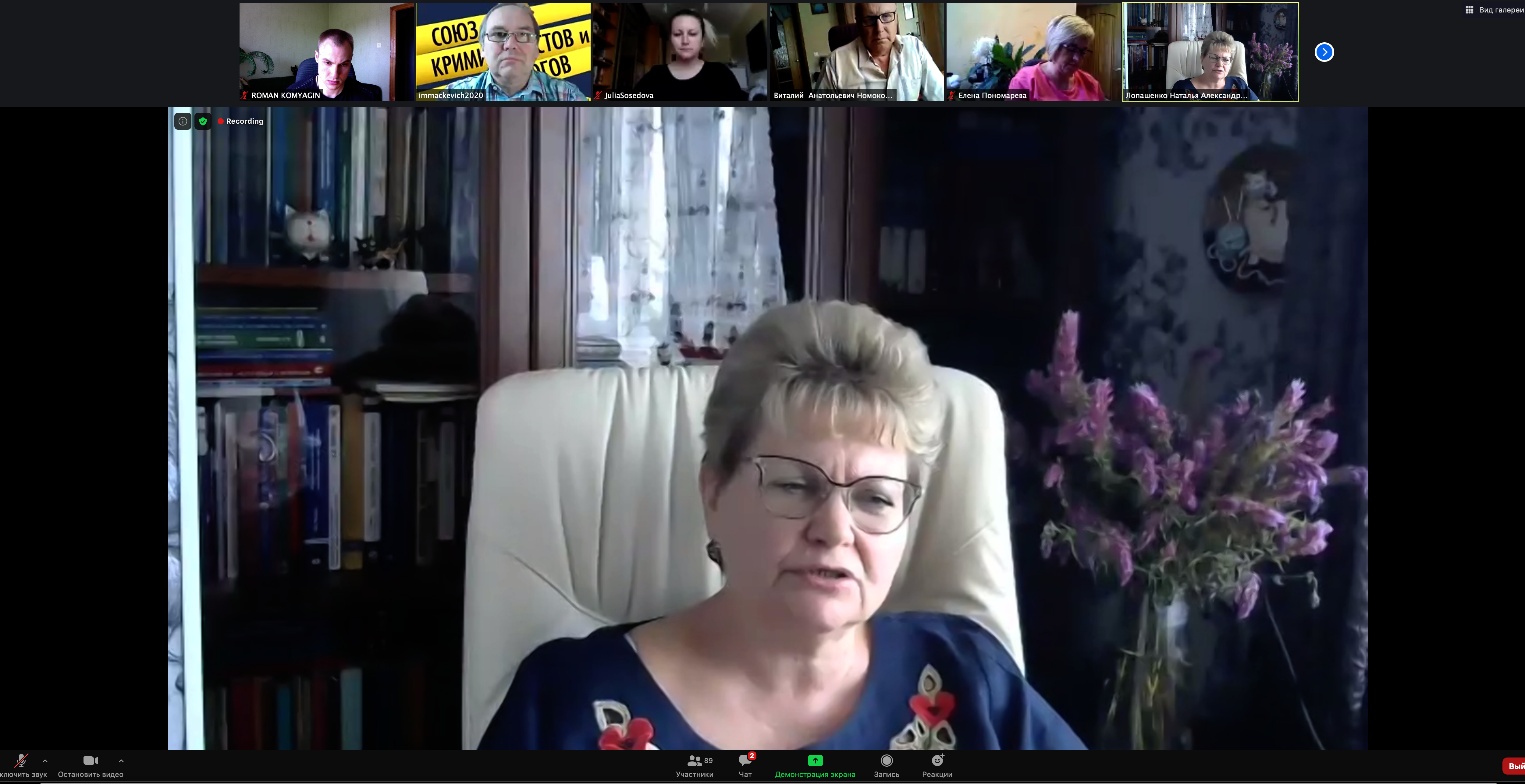 PERSON: Igor M. Matskevich Author and organizer: Natalia A. Lopashenko, Doctor of Legal Sciences, Professor, Professor of the Saratov State Academy of Law, Winner of the National Prize for Literature in the field of Law, Honoured Lawyer of the Russian Federation. On 2 July 2020, a regular online meeting of the author’s project «Criminal Law Gatherings at N.A. Lopashenko’s» was held in cooperation with the Saratov Branch Office of the Union of Criminalists and Criminologists. The event was held in the «Person» format and was dedicated to Igor Mikhailovich Matskevich, Doctor of Legal Sciences, Professor, Honoured Worker of Science of Russia, Honoured Worker of Higher Professional Education of Russia, Honoured Worker of the Prosecutor’s Office of Russia, President of the public organization «Union of Criminalists and Criminologists», Head of the Chair of Criminology and Criminal Executive Law at Kutafin Moscow State Law University (MSAL), Professor of the Chair of Criminal Law and Criminology at Lomonosov Moscow State University, Chief Scientific Secretary of the Higher Attestation Commission. In total, the event was attended by about 100 scientists and practitioners from all regions of Russia and neighbouring countries. At the beginning, the organizer of the event, Doctor of Legal Sciences, Professor N.A. Lopashenko welcomed the participants in the meeting and introduced the main speaker. She highlighted the specific stages of his biography, the scope of scientific interests, significant published works, positions held, hobbies and pastimes. Everyone’s attention was especially drawn to pieces of music created and performed by I.M. Matskevich. The participants of the event had the right to ask personal questions that were not related to their professional activities. In particular, they asked: «What kind of activity is most comfortable for You?» (D.I. Tislenko, Associate Professor, Judge of the Arbitration Court of Voronezh Oblast); «Would You like Your son to become a lawyer?» (Y.Y. Sosedova, Lawyer, Tambov); «One of Your hobbies is tourism. What place would You like to visit?» (E.E. Ponomareva, Associate Professor, Lawyer, Petropavlovsk-Kamchatsky). Then I.M. Matskevich outlined the topic of his speech: «Crime: tomorrow has come» and moved on to the main report. The basic features and components of the modern scientific and technical revolution, the cybernetic revolution, the digitalization of modern society and the exaggerated importance of artificial intelligence problems were highlighted in detail. Special attention was paid to the personality of a modern criminal and its characteristics. So, the professor identified sociopaths (positive sociopaths) as a type of criminal that has become widespread in today’s world and claims to be the main prototype of the criminal of the future. He also defined his hypertrophied features. Some issues related to the false perception of reducing violent crime, the impact of an increasing standard of living on the trends of modern crime and many others were also covered. After completing the main report, I.M. Matskevich answered the questions that were asked in advance and received from the participants in the event during the live communication. The following scientific issues were raised:

Of course, Professor Igor M. Matskevich, Chief Scientific Secretary of the HAC, answered extensively to questions related to the activities of the HAC:

During the discussion of Professor I.M. Matskevich’ conference report, the statement were made by, in particular: Professor Y. I. Gilinskiy (St. Petersburg) (the main message of the speech – «The type of a sociopath is an interesting and promising direction in the study of personality of a modern criminal»); Associate Professor R.E. Tokarchuk (Simferopol) («Among the needs of contemporary society, significantly increased the percentage of people with a need for self-realization»); Professor V.F. Lapshin (Ryazan) («Objective imputation is one of the most dangerous phenomena in modern criminal socio-legal reality»); etc. All participants expressed their gratitude to I.M. Matskevich for an interesting performance. Then a new category of «Criminal Law Gatherings at Lopashenko’s» was presented: «Legal Business With Daria Lopashenko». The project leader Daria V. Lopashenko (Moscow), Candidate of Legal Sciences, Marketing Director of the Law Bureau of Forward Legal made a presentation on the topic «Legal business during coronavirus». After the presentation she answered questions and remarks:

N.A. Lopashenko addressed the participants with a final speech and thanked everyone for the interest. She invited the colleagues to the next meeting taking place after the summer vacation. The review was prepared by Roman Komyagin, Post-graduate Student of the Saratov State Academy of Law, Secretary of the Saratov Branch Office of the Union of Criminalists and Criminologists